Get In Touch for a Personalised Quote Here

Upon arrival into Ho Chi Minh (Saigon) Airport, you will be met by one of our representatives and transferred to your accommodation, Mövenpick Hotel Saigon, where you will be able to spend the rest of the day at leisure.

Over the next few days you will be taken on a tour of the city, visiting the iconic Reunification Conference Hall, which was formerly the Presidential Palace until the Viet Cong took control of the South. You will also see the impressive Notre Dame Cathedral and General Post Office, both built by the French in the 19th Century. You will also enjoy a day trip to the Cu Chi Tunnels, 75 miles from the city and constructed during the Vietnam War, as well as a day trip to the Mekong Delta, visiting the famous floating markets near the village of My Tho by boat, with a guided walking tour to allow you to try some local produce and a traditional lunch at a local restaurant.

Ho Chi Minh is the largest city in Vietnam, with a population of nearly 7 million. It is the principle city of Vietnamese tourism and commerce, having been boasted in the last decade by foreign trade and investment. Formerly known as Saigon, as the capital of the French colony of Cochinchina and of South Vietnam from 1955-75, the name was changed to that of Ho Chi Minh, the leader of the North Vietnamese forces.

The Cu Chi Tunnels are a now-legendary and fascinating network of over 155 miles of tunnels controlled by the Vietcong during the Vietnam War. At the height of the war, they connected to a tunnel network stretching from Saigon to the Cambodian border. The underground network provided sleeping quarters, meeting rooms, hospitals, and other social rooms. This district is known nationwide as the base where the Vietnamese mounted their operations of the Tet Offensive in 1968. 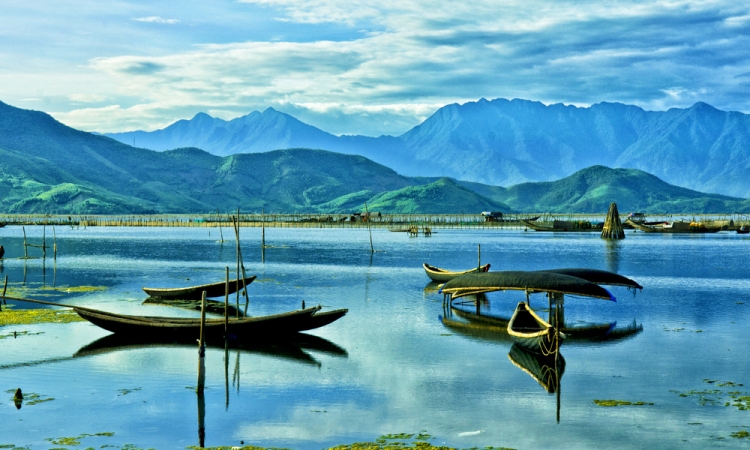 After breakfast you will be transferred to the airport for your flight to Da Nang, from where you will be met by one of our representatives and transferred to your hotel in Hoi an, Boutique Hoi An Resort, with lunch at a local restaurant and a city tour en-route. In the afternoon you will be taken around the old town of Hoi An, visiting the Phung Hung former merchants’ houses from the 19th Century, the interesting and informative Museum of Hoi An, as well as the Kwan Kung Temple, built in the 17th Century and dedicated to the Chinese general Kwan Kung. You will also stop at the 16th Century Japanese Covered Bridge and pagoda, Hoi An Market and the Workshop of Traditional Handicrafts, where you can buy some souvenirs.

The next day you will be taken to the UNESCO World Heritage Site of My Son, a Hindu complex dating from the 4th Century, where you will be given a morning tour of the site before returning to Hoi An with the afternoon and evening at leisure.

My Son has been a UNESCO World Heritage Site since 1999 and was built in the 4th century. It is a Champa city, a Cham intellectual and religious centre, and also served as a burial place for Cham monarchs. The monuments here are set in a lush valley surrounded by hills and towered-over by the massive Cat’s Tooth Mountain (Hon Quap). Not only is it interesting historically, but it is very picturesque, with brooks and streams passing through the structures and coffee plantations dotted around the hills. Although the site was damaged considerably during the Vietnam War, by American carpet-bombing, a lot of the structures are still in good condition.

After breakfast you will check-out and be transferred to the airport for your flight to Hanoi. Upon arrival at Noi Bai Airport, you will be greeted by your guide and transferred to your hotel, Silk Path Hotel, where you will spend 1 night. In the afternoon you will be taken on a tour of the city, with lunch at a local restaurant.

Hanoi is the capital city and is renowned for its verdant parks, picturesque lakes and French architecture. On your tour you will visit Văn Miếu, Vietnam’s first university, Hoan Kiem Lake and Ngoc Son Temple, primarily dedicated to General Tran Hung Dao, who defeated the Mongols in the 13th century, and surrounded by trees and water. Afterwards you can enjoy a cycle ride to the Old Quarters, a district of 18th & 19th century architecture, with each street having been home to a particular craft guild.

After an early breakfast you will be transferred to your traditional junk for a cruise around Ha Long Bay, on which you will spend the night. During the cruise you will visit some of the caves, grottoes, floating villages and beaches on Ha Long bay, with lunch prepared on board. In the afternoon you can relax on the beach or climb atop Titop Island, which has stunning panoramic views of the bay. Dinner will be enjoyed on board.

Ha Long Bay is one of the most magnificent natural wonders of the Far East and it has been designated a UNESCO heritage site. From the emerald-green waters of Ha Long Bay some 3,000 limestone and dolomite islands rise jaggedly from the Gulf of Tonkin, with local folklore saying that an enormous dragon created the bay and outcroppings as it thrashed its way toward the open sea to prevent the intrusion of enemy navies. 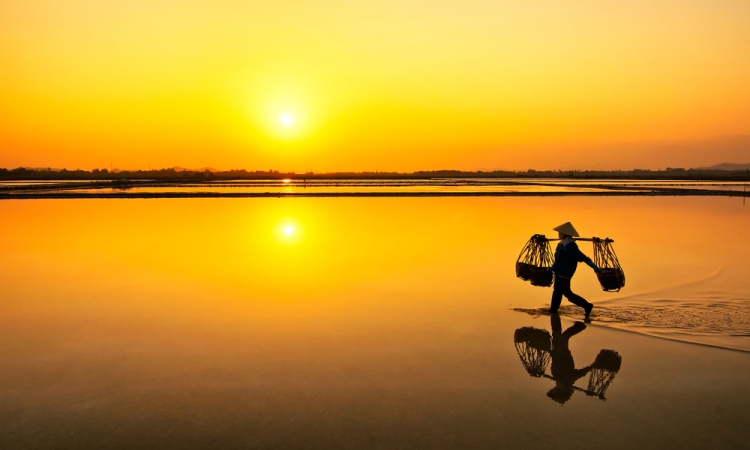 In the morning you can participate in a Tai Chi class on board and watch sunrise over the bay. After breakfast you will visit Surprise Cave before disembarking mid-morning and continuing onwards to Hanoi.

Upon arrival you will check-in to Silk Path Hotel for 1 night. The afternoon can be spent at leisure, relaxing at the hotel or wandering around the old town. 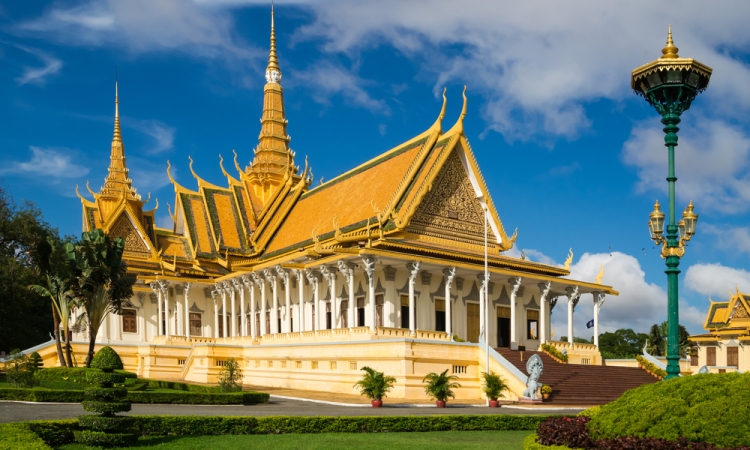 After breakfast you will be transferred to the airport for your flight to Phnom Penh, where you will be met and transferred by your English-speaking guide to your accommodation, Sunway Hotel, for 1 night.

In the afternoon you will be taken to visit the National Museum, Wat Phnom and Independence Monument, which was constructed in 1954 after independence. You can also visit The Tuol Sleng Prison Museum, a prison and torture camp from 1975 used by the Khmer Rouge regime.

This morning you will be taken on a tour of Phnom Penh itself, visiting the magnificent Royal Palace, which stills serve as the royal residence, the sacred Silver Pagoda and Phsar Thom Thmei market, built in 1937 and home to countless stalls of goods and souvenirs.

After lunch at a local restaurant you will be taken to the airport for your domestic flight to Siem Reap, where you will be met by an English-speaking guide and transferred to your hotel for 2 nights, Angkor Miracle Resort & Spa. 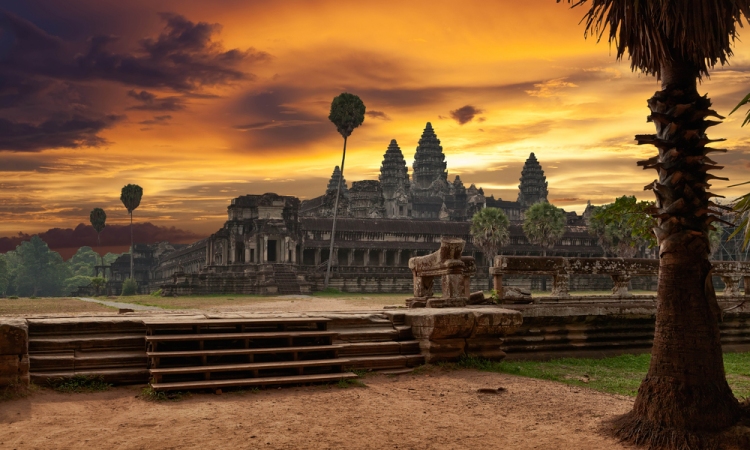 After breakfast you will depart on a guided tour of the Angkor temples complex, visiting the Southern Gate of Angkor Thom, the extensive temple complex of distinct towers, elaborate carved murals, colonnades and courtyards. A highlight is the Bayon temple, located in the centre, which is covered in bas reliefs depicting daily life and historical Khmer battles.

Afterwards you will visit Kravan, a brick temple built by Hashavarman in the first quarter of the 10th century, the enormous Jayavarman VII, a large basin (the royal bath), 700m by 300m in size, and Banteay Kdei and Ta Keo, a large Buddhist monastery.

End the day at Phnom Bakheng hill, watching the sun set over Tonle Sap Lake and a distant Angkor Wat in the jungle. 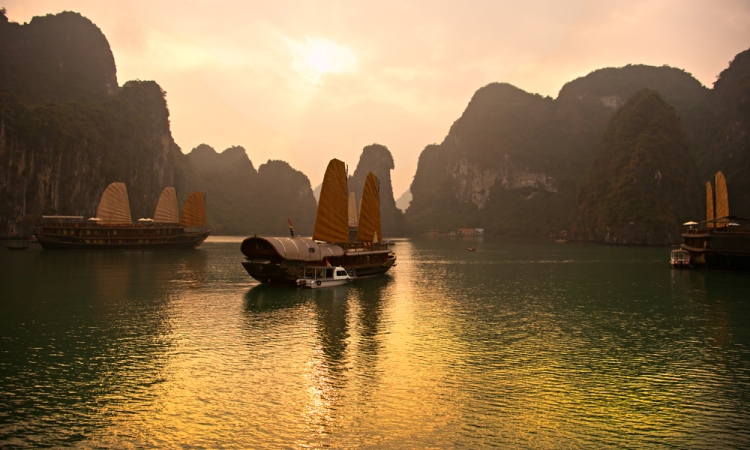 Today you will have the day at leisure until it is time for your return flight home (via Bangkok), when we will drive you to the airport and bid you farewell.

Get In Touch for a Personalised Quote Here